What is leading beyond authority?

What does it mean to lead beyond authority?

The inner circle of authority

Step by step or leaps and bounds?

Success across the circles

Stories of people who have done it

Ten keys to leading beyond authority

Are you leading beyond authority? 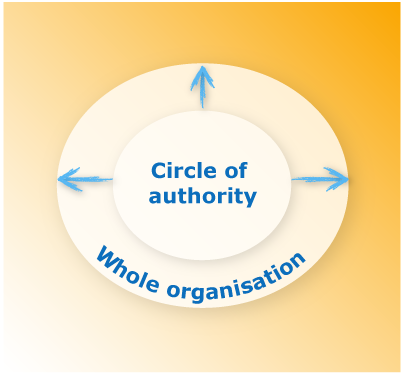 Then there is the first outer circle. This represents the whole organisation within which the leader operates. At any given time, there is a very good chance that the chief executive will be trying to get all the leaders, at every level, in all the different core circles, to operate beyond them – for the benefit of the organisation as a whole.

Alan Lafley, who runs Procter & Gamble, apparently says: ‘A measure of a person’s power is that their circle of influence is greater than their circle of control.’ Indeed, there is almost no chief executive in the world, be it of a company (big or small), a hospital, a civil service department or some other entity, who does not want to get their organisation operating horizontally as well as vertically (just as long as it is both – and not one at the expense of the other). They want the parts operating cleverly together so that they maximise the effectiveness of the whole. They want two and two to make eight.

Many organisations wrestle with the silo problem:

So the chief executives try to change the culture. They change the structure. They even, in some brave cases, change the way they analyse the performance indicators. (I’m told that one of the biggest investment banks in the City of London became so convinced of the need for change that they seriously considered no longer analysing profitability at all so as to break the vertical structures that had built up around geography and lines of business.) In very rare cases, the chiefs restructure the reward systems to encourage people to take wider responsibility. They do so because they know that it’s in this outer ring that their best people add the most value to the organisation.

But when leaders who have been persuaded to venture into the first outer circle actually take this step, they find a very different world. Here, there is no authority. And their legitimacy is constantly in question, with other leaders demanding to know why they are messing about in territory that is not their own.

When I speak about leading beyond authority, it’s fun to tease the audience. When I first mention the expression, their eyes glaze over and I know they are thinking ‘busybodies’. So I catch them – as they glaze over – and say:

This is the problem. Your instinctive response. Thinking ‘busybodies’, rather than leaders who are prepared to look beyond their budget and see the bigger picture. You illustrated the challenge beautifully the moment you all glazed over.

And it is indeed this response that seldom fails to put people off trying to work outside their core circles. After all, no one wants to be a busybody, to appear so arrogant as to assume authority before they have been given it. However, we need more leaders who will run the gauntlet of criticism about their legitimacy and take on problems other than their own. Because, as a senior civil servant said to me recently:

It’s ridiculous, indeed almost the highest form of arrogance, to assume that all the problems will fit neatly into the departments we have organised ourselves into.

And we won’t just fail to solve the problems. We’ll miss opportunities too.

There’s another problem in the first outer circle. Not only is your legitimacy questioned in a way that you have never dreamed of (and certainly never had to face in your circle of authority), but it can be horrible out there. It takes forever to make anything happen. The timescales are ridiculous. And you have to spend your whole time building coalitions if you want to get anything done. To many, the temptation to revert back into the core circle of authority is huge. Added to which, deep inside, you also know that it’s your achievements in this inner circle that will really gain you recognition.

I talked about this with a very bright director of a successful Internet-based company. He had shared an idea with the American CEO, who then invited him to the United States to test it out. It was a classic ‘leading beyond authority’ opportunity – and he found the experience extremely frustrating:

It takes too long; it’s too complex, with multiple stakeholders, many out to neutralise you, none in a position to just say ‘yes’. It’s better to focus on my own area, where what I achieve will be recognised. And it’s not as if I don’t have enough to do already. Never again!

He saw it as horrible. I’d say it’s different.

There are centripetal forces in human nature. People look inwards rather than outwards and the further you go out, the harder it gets. Leadership development needs to seriously invest in taking people off the tramlines and out of their comfort zone.

Any cookies that may not be particularly necessary for the website to function and is used specifically to collect user personal data via analytics, ads, other embedded contents are termed as non-necessary cookies. It is mandatory to procure user consent prior to running these cookies on your website.